Pedestrian-focused principles should be at the forefront of cities’ efforts to rethink road space, both in response to COVID-19 and in the long term. Photo by WRI México

For many city leaders, more cars and more highways mean better transportation. And during the current pandemic, fear of COVID-19’s spread is pushing some to turn to private vehicles. But a safe, sustainable transport future does not include further dependence on cars, as the rising global trend of pedestrian fatalities, congested and disconnected urban growth, air pollution, and climate emissions makes clear.

More than 1.35 million people die each year as a result of road traffic crashes, and more than half of all road traffic deaths are among pedestrians, cyclists and motorcyclists. Since the last World Health Organization road safety report in 2015, 300 more people are dying every day in road crashes. In India, the pedestrian fatality share has risen 84% over the last four years, with average daily fatalities going from 34 to 62 in 2018. In the United States, around 6,000 pedestrians were killed in road crashes in 2018 – a 4% increase from 2017 and the country’s highest annual mortality rate since 1990.

As cities around the world open miles of new bike lanes and more street space to pedestrians in response to COVID-19, what began as a solution for socially distanced mobility has become a permanent vision for some cities that realize the wide-ranging benefits of streets that serve a broader range of users. But poor design and integration of “complete streets” principles can lead to conditions that are less safe and interventions that are poorly integrated with the existing city. 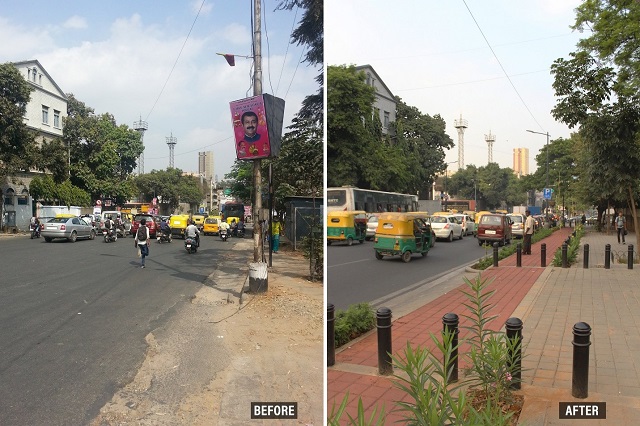 A make-do sidewalk in Bengaluru, redesigned into a wide, continuous, protected sidewalk with fixed bollards to prevent motor vehicles from encroaching onto the pedestrian space. Photo by Jana Urban Space (India)

Comfort, continuity and safety determine the success of a sidewalk. Well-planned sidewalks are continuous – not stopping abruptly mid-block or at road crossings – and provide space for pedestrians to move around, sit, shop, eat, meet and socialize. Recommended width is at least 1.5-1.8 meters (5-6 feet) for low-volume areas and 2.5 meters (8 feet) for high-volume areas. Social distancing may require even more space in high volume areas.

A sidewalk should be sectioned into three parts: a “frontage zone” to account for doors, furnishings and other elements of the commercial establishment; an obstacle-free “pedestrian zone” to foster easy movement and circulation; and a “furnishing zone” that includes trees, signage, trash cans, street furniture and drainage. A safe and accessible sidewalk should also incorporate curb ramps to improve accessibility, use anti-skid paving materials to reduce the risk of slips and falls during poor weather conditions, and tactile surfaces to assist pedestrians who are visually impaired.

Evidence from the United States shows that pedestrian traffic crashes are more than twice as likely to occur in places without sidewalks, while streets with sidewalks on both sides have the fewest crashes.

Pedestrian plazas can inexpensively transform under-used spaces into community assets. Unstructured, under-occupied or misused dead zones can be revamped with the help of paint, planter boxes, artwork and street furniture, along with high-resistance and low-maintenance lighting and landscaping.

These transformations have an important impact on pedestrian safety. New York City has seen a 16% decrease in speeding and a 26% reduction in traffic crashes along streets that contain pedestrian plazas. They also support local businesses and foster neighborhood interaction.

Residential neighborhood Cidade 2000 in Fortaleza, Brazil, was often taken over by vehicles and illegal parking until 2017, when the neighborhood received the city’s first traffic-calming street transformation – a project named Cidade da Gente (“City of the People”). With support from WRI Brasil, the intervention turned 1,200 square meters of parking space and traffic lanes into a functional pedestrian plaza. This included removing a traffic lane, decreasing the speed limit to 30 km/hr, widening sidewalks, and implementing curb extensions and five new pedestrian crossings. Street art, furniture and green infrastructure was also added to create a more defined and welcoming space for pedestrians. Due to the project’s success, Fortaleza made the intervention permanent, and it is now a citywide example of how smart design and tactical urbanism can improve streets for everyone. 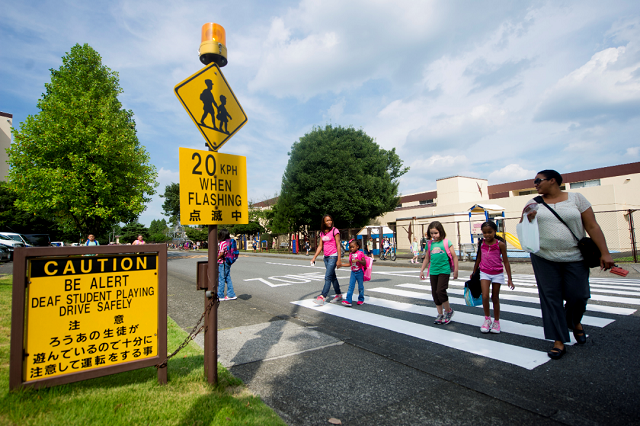 Children are more vulnerable to collisions than adults due to their size, limited impulse control and slower reaction time. In Hyderabad, India, 25% of boys and 11% of girls aged 11-14 reported a road traffic injury over the course of one year during school journeys.

Areas around playgrounds, parks, schools and community centers require special attention and safe zones. Safe zones should be equipped with good conditions for walking and cycling, as well as designated pick-up and drop-off areas. Traffic signs and road markings should warn drivers that they are entering a special zone. Skid-proof pavements, high-visibility crosswalks, and wide and accessible sidewalks should make it easy for pedestrians to navigate. And traffic-calming infrastructure should be implemented to reduce vehicle speeds.

SARSAI, the winner of the 2018-2019 WRI Ross Center Prize for Cities, helped reduce traffic injuries among school children in Dar Es Salaam, Tanzania, and other African cities by 26% through targeted interventions in school areas. 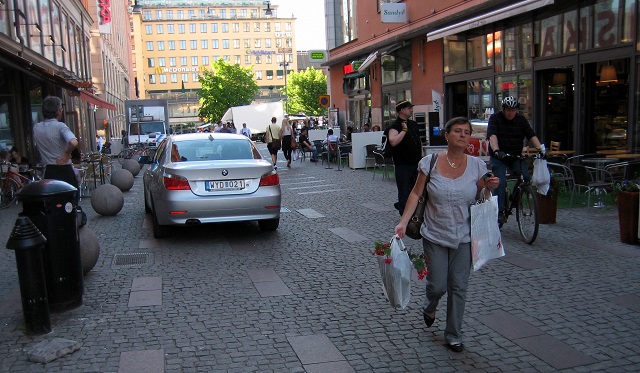 A vibrant shared street in Stockholm, used by pedestrians, cyclists and motorists. Photo by Michael Kodransky/Flickr

Although not advisable under pandemic conditions, in high-density areas with low volumes of slow-moving vehicle traffic, opening streets to allow cars, pedestrians, cyclists and other road users to mix within the same space can actually improve road safety under normal conditions.

Shared streets do not have typical street elements, like vertical curbs, signs, level differences, pavement markings or colors that segregate different modes. But they often include elements that promote pedestrian priority and encourage social, economic and cultural exchange, such as street furniture, landscaping and gathering spaces. The end result of these design cues is that all road users exercise more caution, and vehicles tend to travel at much lower speeds.

Data from the Netherlands indicates that creating shared streets can reduce the incidence of crashes by up to 50%. 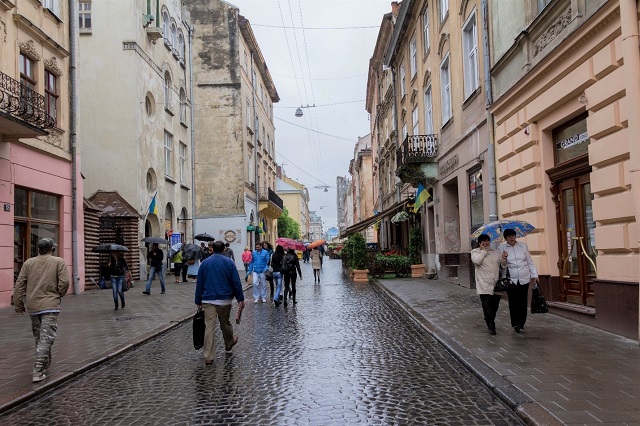 As some cities are now doing in response to COVID-19, in areas with especially high pedestrian volume, cities should consider banning vehicle traffic entirely to allow people to move freely and safely without dodging vehicles.

Pedestrian-only streets not only improve overall safety for those on foot, but they can also boost local air quality, land value, store sales and overall health, while reducing noise levels. A 2016 study of more than 100 cities around the world that maintained multiple pedestrian-only streets found that retail sales increased 49%. Cities in Austria, Germany and Scandinavian countries had more than 60% increase in sales.

Pedestrian-only streets should be strategically located and easily accessible from residential and commercial spaces. They should be well-connected to the public transit systems, bicycle routes, parking and other access points. 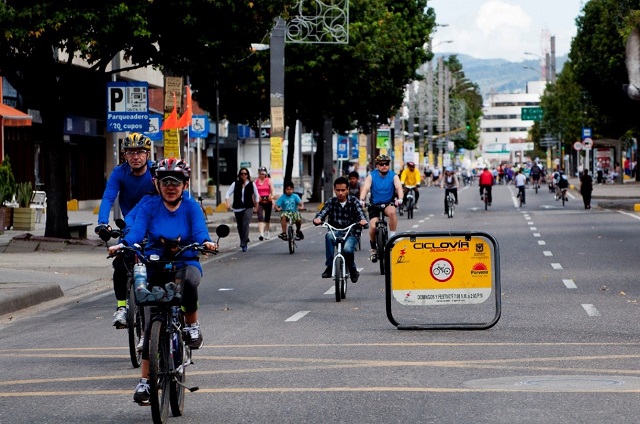 Car-free days, when cities shut down a street or network of streets to vehicle traffic, encourage people to explore their city by bike or foot and help change perspectives about streets and public space. More than 2,000 cities celebrated World Car-Free Day on September 22 last year across 46 countries.

Bogotá, Colombia, holds the world’s largest car-free event, La Ciclovía, which takes place every Sunday from 7am to 2pm, covering a majority of the city. It provides more than 75 miles of car-free space to more than 1.5 million people. (Under the city’s COVID-19 travel restrictions, parts of the route have been opened during the weekday, too, to allow essential workers alternatives to public transport.)

Car-free days are opportunities to revive, liven and transform neighborhoods. Car parking spaces and vacant street corners are converted into parklets for games, leisure activities, sports and performances, while the streets are taken over by pedestrians and cyclists of all ages.

Regular car-free days can increase physical activity, decrease pollution levels, aid social inclusion and community building, provide opportunities for economic revitalization, and promote biking and walking in a safer environment. When Paris held its first car-free day in 2015, there was a 40% reduction in exhaust emissions and a 50% reduction in sound levels in the city center.

Imagine a city designed to accommodate pedestrians first. It’s more connected, active, safer and healthier. As cities respond to the effects of COVID-19, efforts to rethink road space should place these pedestrian-focused principles among their highest priorities. People know how to use a good street when they see it, and it is the responsibility of urban planners to create them.

Nikita Luke is a Senior Project Associate for Health and Road Safety at WRI Ross Center for Sustainable Cities.