A World Resources Institute website
Guest Contributor
Traumatized and Trapped: After Sexual Assault, How Can Cities Welcome Women Back to Public Transport? 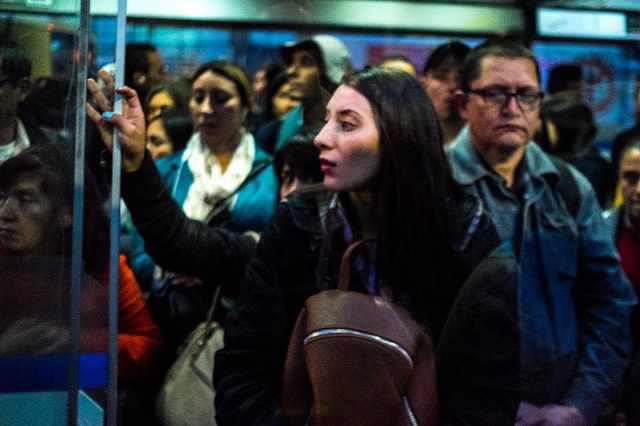 New research suggests that many cities are full of women who need additional help recovering their ability to move freely. Photo by Galo Naranjo/Flickr

Sexual assault on public transit is all too common. In Bogotá, Colombia, an incredible 37% of female riders of the bus rapid transit system report experiencing unwanted sexual contact while using the system, according to new research, funded in part by the Lee Schipper Memorial Scholarship.

These types of sexual misconduct – groping, sexual rubbing or similar acts – are often thought of as innocuous crimes; less serious as opposed to robbery or rape. However, a closer look at the experience of sexual assault victims in two cities – Bogotá, Colombia, and El Alto, Bolivia – indicates that victims in these cases experience many of the same consequences as victims of other kinds of sexual trauma.

A single sexual assault can affect a victim’s mobility and wellbeing for years after the incident. To keep themselves safe, some victims switch to private transport, avoid certain times a day or go out less frequently. But by necessity or choice, many eventually reenter the public transit system, becoming vulnerable once again.

This new study, published in the Journal of Transport & Health, explores how cities can better welcome sexually abused women back into public transport systems and how to make transit safer for everyone.

If victims choose to reenter the transit system, they may experience a trauma reaction known as hypervigilance: a stressful state of heightened anxiety and awareness, combined with a need to safeguard their personal space. Unfortunately, crowded transit systems make it nearly impossible for victims to maintain personal boundaries. One victim interviewed for the study described her experience on transit after sexual assault: “Any touch I feel on my bottom, whether it’s with an umbrella or the edge of a bag, puts me on alert…The first thing I think is ‘they’re touching me.’”

In addition to causing distress, crowded vehicles and stations objectively place women – who make up most, but not all victims – at risk of being assaulted a second, third or fourth time. Victims attempt to protect themselves by avoiding travel at certain times of day, traveling in groups, switching to private transportation or becoming less mobile altogether. When in transit, many choose locations within vehicles that feel comparatively safe. As one explained, “I always try to be next to women, because with men, you don’t know who is good or who is bad, or who is going to do something obscene to you.” Other victims choose physically protected locations, such as near a wall or near the driver. Many also use objects as shields to insulate themselves or as potential weapons.

In contrast to women who avoid someone who appears drunk or otherwise risky, victims often engage in these avoidance behaviors whether or not they perceive a specific threat, and whether or not they reported lasting emotional distress as a consequence of their assault. In short, the violence these victims were exposed to appears to have permanently shifted the way they move in public, limiting mobility and reducing quality of life.

Creating Safer Mobility for All

For cities to be safe and productive, women need to use – and feel safe using – public transport. This research shows that many cities are full of women who have been assaulted and traumatized and need additional help recovering their ability to move freely.

In addition to focusing on the traditional approach of crime prevention and monitoring, evidence suggests policies to care for existing victims can also help. Many policies serve multiple aims. For example, efforts to reduce crowding also decrease opportunities for would-be predators and allow previous victims to preserve personal space and avoid excessive contact with strangers. Additionally, improving reporting processes and promoting bystander intervention are both critical.

Another popular but controversial policy is women-only carriages and services, which has been implemented famously in Tokyo, Japan, and Mexico City, Mexico. There is little evidence that these policies reduce transit crime, as women-only services are typically available only to a small minority of users and may not be welcoming to gender-nonconforming individuals. There are also concerns about the notion of “safety through segregation.” However, this research shows that there is an important argument for considering women-only transit: it provides a way for victims to recover their freedom of movement. Many victims in mixed systems manage distress by standing near other female passengers, creating natural bubbles of women-only space. Women-only transit services merely facilitate this coping mechanism.

To move forward safely, cities should consider a variety of mechanisms and policies based on what makes sense in their local context. Today, many women are suffering because they have been harmed in transit systems that have not valued their safety. Planners have a duty to provide vulnerable people with access to transportation that does not require them to sacrifice their autonomy and wellbeing.

The complete report is available here for free. Individuals or organizations who subscribe to the Journal of Transport and Health can access the published version here.

Gwen Kash is a postdoctoral fellow at the Georgia Institute of Technology and winner of a 2015 Lee Schipper Memorial Scholarship.