A World Resources Institute website
Integrated Transport
People Move to Cities for Better Jobs and Opportunities. Impossible Commutes Are Getting in the Way 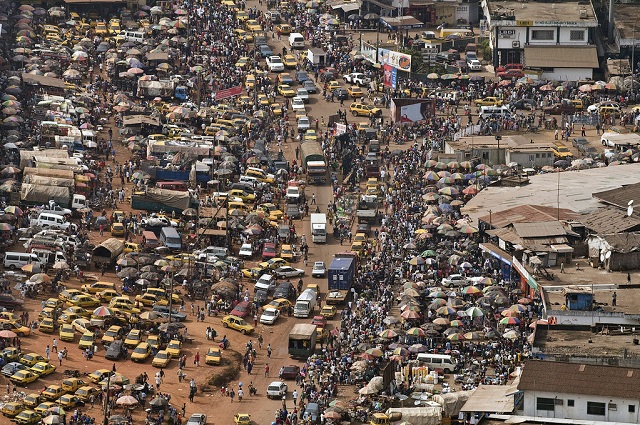 Emmanuel leaves his home at 5 a.m. every morning with his two daughters.

They take a mini-bus, or “tro-tro,” from their house in Awoshie, a residential neighborhood of Accra, Ghana, to the central business district where Emmanuel works. The trip usually costs $0.90 roundtrip, about 20% of the average daily wage in Accra, and takes well over an hour. When traffic is severe, the cost doubles. To save a bus ticket, Emmanuel sometimes puts one daughter in the other’s lap.

Emmanuel’s commute is becoming the norm for many urbanites, especially in developing cities in Asia, Africa and Latin America. A new WRI working paper finds that though cities are hotspots for jobs and other opportunities, many urbanites are finding it increasingly difficult to access these benefits. Analysis of Mexico City and Johannesburg found that 56% and 42% of people, respectively, cannot easily get to jobs because of their location, limited transport options, or both. Many residents in these cities experience long and expensive commutes in often uncomfortable and unsafe vehicles through heavy traffic. Others have so few travel options or nearby opportunities they are essentially stranded.

The same patterns that restrict access in Mexico City and Johannesburg are present around the world. Access to jobs, healthcare, education and other opportunities are increasingly out of reach for millions of people like Emmanuel.

“Accessibility” is the ease with which people can reach jobs, schools, healthcare, entertainment and other opportunities.

Levels of accessibility depend on several factors. Some are place-specific: the availability of amenities and services, their dispersal throughout the city and whether the transportation system allows people to reach them safely, affordably and efficiently. Accessibility is a function of both land use and transportation and depends on how effectively the two, together, serve the city.

Other factors are particular to individuals, such as their ability to pay (both in time and money) to reach an opportunity, as well as their residential choices, and tolerances for safety and comfort while traveling. When transit systems are unsafe or not inclusively designed, for example, women, children and people with disabilities face larger barriers to accessibility than other demographics.

Access to #jobs, services and opportunities is key to a city’s economic vitality & quality of life. But rapid urbanization and motorization have restricted #access for many. Find out what #cities can do to create #citiesforall: https://t.co/pY0uB5Svd6 pic.twitter.com/GiaJQqRDys

Why Are Cities Becoming Less Accessible?

Accessibility is critical to quality of life and social mobility, yet most cities focus on transport supply (how many kilometers of roads or bus routes there are), or on transport efficiency (how many people travel on certain routes within a given period of time) rather than on what this transport actually enables people to do. Compounding this problem are land use policies that favor new development far away from city centers and existing public transit networks.

As cities have grown, so has the number of motorized vehicles on the roads. In 2010, there were 2.5 new motor vehicle registrations for every child born in Latin America; in India, there were three for every birth.

While many people see owning a car as increasing their accessibility, this is only true to a point. Eventually, traffic congestion inhibits mobility for everyone. Estimates of the value of time lost in congestion already range between 2 and 5% of GDP in Asia. This creates a vicious cycle. More cars in the city means more infrastructure that favors cars over people. Urban development that prioritizes private vehicles over pedestrians, bicycles and public transit incentivizes outward expansion of cities and increased trip lengths. These development patterns lead, in turn, to longer walks, longer waits and higher travel expenses for residents, making cities less accessible. They also lead to higher greenhouse gas emissions due to longer distances traveled for people and goods.

This pattern is playing out around the world. In the Pretoria-Johannesburg region of South Africa, residents from informal settlements on the periphery of the city travel between 20 and 23 kilometers on average looking for work. In Beijing, drivers spend an average of nearly three hours in traffic each weekday and lose an average of $159 a month – 13% of the average monthly wage – to congestion.

Johannesburg, with its 5 million residents, has been expanding outward over the last 20 years. Though projects such as the Transit Oriented Development Corridors have attempted to improve public transit, close to half of residents remain under-served by available transportation options.

Using jobs as a proxy for access to opportunities more generally, we measured the number of formal and informal jobs that are reachable within 60 minutes of travel, be it by walking, taking public transport (both formal and informal) or using private vehicles. We found that the average Johannesburg resident can access only 49% of available jobs in the city. The group of residents with the lowest accessibility (about 13% of the population) can only reach 3% of potential jobs in the city within an hour. At the other extreme, 10% of residents with the most accessibility can reach approximately 87% of jobs.

The under-served in Johannesburg – i.e., those who can access below-average numbers of jobs within 60 minutes – are either spending a lot of time and money traveling around the city or are simply unable to access opportunities at all because transport options are prohibitively expensive or long.

So How Do We Improve Accessibility for All?

At its core, accessibility is a question of justice and equity. Access to opportunities is necessary not only for individuals to enjoy urban life, but also to move up the socioeconomic ladder. So too, we argue that by promoting multimodal accessibility that prioritizes the needs of the under-served, equitable cities can move up the socioeconomic ladder, providing more benefits to residents, achieving greater economic productivity and improving environmental quality.

To improve access for all, cities need to break the vicious cycle of declining urban density, increased private vehicle use, and car-oriented development. To do this, cities should focus on three action areas:

Maria Hart is a Research and Engagement Specialist at WRI Ross Center for Sustainable Cities.

Anjali Mahendra is Director of Research at WRI Ross Center for Sustainable Cities.