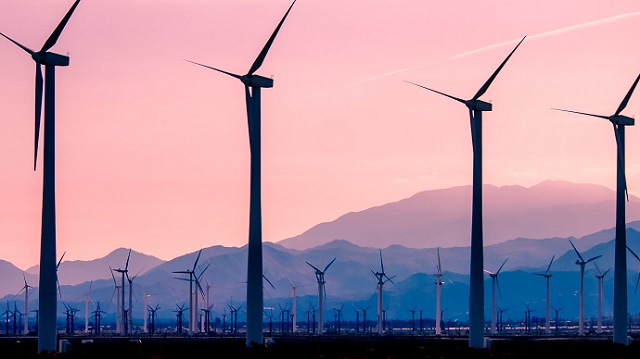 Cities and states are stepping up on climate action across the United States, investing in clean energy, like this wind farm near Los Angeles. Photo by Ian D. Keating/Flickr

The emergence of the Green New Deal has inspired unprecedented activism and lively debate about the future of climate action in Congress and the relationship between climate policy and a broader economic and social equity agenda. So far, it’s only been talk, since the Green New Deal’s explicit goal is to set the stage for bold legislation next year – although many members of Congress want to make some headway this year. That hasn’t stopped states and cities from taking bold climate action now.

Analysis by WRI and its partners for America’s Pledge showed that implementing commitments made by states, cities and companies by mid-2018 would help reduce U.S. greenhouse gas emissions by 17% by 2025 without any new action in Washington. WRI also found that deeper, broader subnational action could cut emissions by 24%, which is within striking distance of the target the United States set under the Paris Agreement on climate change.

The U.S. Climate Alliance, a group of states committed to implementing policies that meet the Paris Agreement goals, now includes 23 governors representing more than half of the U.S. population and nearly 60% of U.S. GDP. A growing number of states have set ambitious clean electricity targets, such as having 50% of their electricity come from renewable sources by 2030 and 100% by 2050. Many states have also committed to adopting other climate solutions, such as limiting the use of hydrofluorocarbon super-pollutants and joining regional programs to cap and reduce emissions from power plants and the transportation sector. 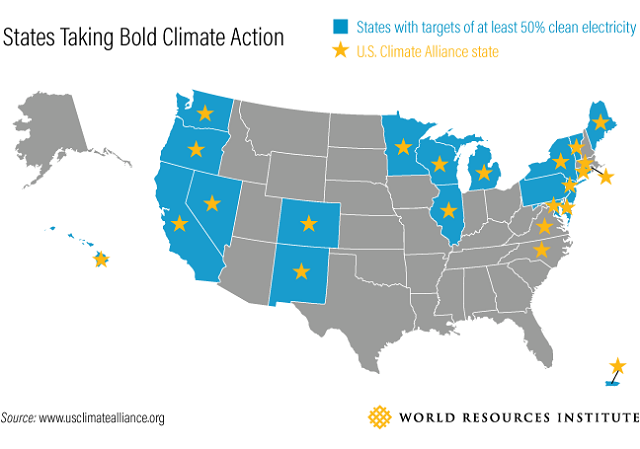 On the municipal level, 25 cities have been selected to participate in the Bloomberg Philanthropies American Cities Climate Challenge (of which WRI is a partner) and will receive cutting-edge support to help cut energy waste, supply cities with renewable electricity, electrify their bus fleets and take other steps to meet near-term climate pollution reduction goals.

Three states, one territory and three cities are helping to lead the way:

In March, first-year Governor Michelle Lujan Grisham signed the Energy Transition Act (S.B. 489) into law. The new policy ratchets up New Mexico’s current Renewable Portfolio Standard (20% by 2020) to mandate 50% renewable energy by 2030 and 80% by 2040. It also calls for 100% carbon-free electricity by 2045 in the state, which is one of the largest oil and gas producers in the country. Legislators made it a priority to support communities as they shift away from dependence on fossil fuels toward low-carbon energy. The law allocates up to $20 million in severance and job training to aid displaced fossil fuel workers from each retiring plant and $30 million for plant decommissioning and mine reclamation. It also tackles expected tax revenue declines in areas with plant shutdowns by requiring that replacement clean power be generated in the same school district as the old plants.

Maryland lawmakers approved the Clean Energy Jobs Act by veto-proof margins in both the General Assembly and state Senate. It will likely become law with or without Gov. Larry Hogan’s signature, though signing it would elevate his climate credentials (he vetoed a similar measure in 2016). The act boosts Maryland’s Renewable Portfolio Standard to 50% by 2030 (up from 25% by 2020), including a requirement that 14.5% of power come from solar generation. It also mandates that the state examine pathways for 100% clean energy by 2040. Additional measures include incentives for 1.2 gigawatts of offshore wind energy, $15 million in training for clean energy jobs in economically-distressed areas, and a Strategic Energy Investment Fund which dedicates money to clean energy businesses owned by women, veterans and members of minority groups. The new policy could lead to 20,000 new solar jobs and 5,500 new jobs in offshore wind over the next decade.

On April 11, the Washington state House of Representatives followed the state Senate’s lead in passing legislation that commits the state to 100% carbon-neutral electricity sales by 2030 and 100% electricity generation from carbon-free resources by 2045. The bill also mandates the phaseout of coal generation by 2025 and includes some innovative provisions to align utility interests with the public interest in clean and equitable energy services. Building on Washington state’s massive hydroelectric resources, the state is already 75% of the way to the target. Still, Washington must drive down natural gas usage and stop depending on coal imports from Montana and Wyoming. After being reconciled in the Senate, the bill heads to Governor Jay Inslee. If, as expected, Inslee signs it into law, Washington will join Hawaii, California and New Mexico, which have also enacted legislation to mandate 100% clean energy goals.

More than 18 months after Hurricane Maria pummeled Puerto Rico in September 2017, causing the longest power blackout in U.S. history, the island’s electricity system remains expensive, fragile and polluting, since it relies on oil- and coal-fired electricity generators and long-distance transmission lines over hard-to-reach mountainous areas. On April 11, Governor Ricardo Rosselló Nevares signed a bill to build a clean, resilient electricity system powered by Puerto Rico’s abundant renewable resources. The new law calls for 40% of the U.S. territory’s electricity to come from renewable sources by 2025 and 100% by 2050. These ambitious targets will drive some of the fastest development of renewable energy in the United States, since only a tiny share of Puerto Rico’s electricity comes from renewable sources today. It also aims to make the island more resilient to future storms, through a series of interconnected microgrids supported by localized storage that would reduce reliance on long-distance transmission. That makes sense, since scientists found that climate change already makes storms as intense as Hurricane Maria five times more likely.

In February, Los Angeles Mayor Eric Garcetti announced that the city would not refurbish three natural gas-fired power plants, but will instead shift to better align with California’s recent pledge for 100% carbon-neutrality by 2045. Los Angeles is poised to ramp up investment in wind, solar and battery storage, while retiring the natural gas facilities by 2029. Just last week, the city’s Department of Transportation (DOT) opened a new solar panel-clad facility for charging and maintaining its growing electric bus fleet. Primary city bus operators LA DOT and LA Metro have both committed to zero-emission buses by 2030. Los Angeles is receiving support to achieve these and other emissions-reduction goals through the American Cities Climate Challenge.

Another American Cities Climate Challenge winner, Orlando is making strides to transition its municipal vehicle fleet to 100% “advanced fuel” vehicles by 2030 and introduced its first electric work truck this year. With the help of the Climate Challenge, Orlando is working to become a Southeast leader in electric vehicles by installing 150 charging stations by 2020. For the most highly-visited city in the country, these efforts can help introduce thousands of Americans to electric vehicles with the help of Drive Electric Orlando, a non-profit that works with the city’s rental car agencies to offer battery-powered vehicles. Many of the tourists renting electric cars will be heading to the Walt Disney World Resort, which brought online a 50 megawatt solar project to power two of its four theme parks.

Kansas City avoided the most damaging impacts of unprecedented spring flooding that hit other Missouri River Valley communities primarily because of an extensive levee system installed after the disastrous Great Flood of 1993. Still, the city will begin a half-billion dollar project to raise levee walls this year to combat the ever-growing flooding threat. These new adaptive efforts come as the city this year approved a landmark measure to limit its contribution to climate change. The city council voted unanimously to ensure that all municipal electricity be generated by carbon-free sources by 2020 and added new electric vehicle and energy efficiency goals. The city worked with its utility, Kansas City Power & Light, which agreed to build a wind farm to support the target.

Tyler Clevenger is a Research Analyst covering U.S. policies for the Climate and Energy teams at World Resources Institute.