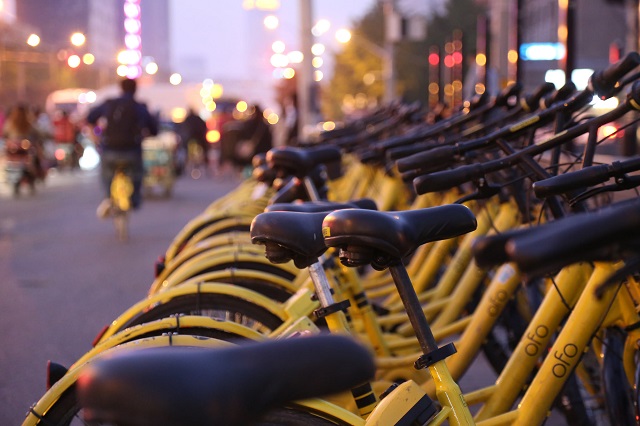 Dockless bike share has taken off in cities around the world, including in Beijing, China. Kentaro IEMOTO/Flickr

Introduced in a basic form in the 1960s, bike-sharing services are now seemingly ubiquitous in many major cities. The propagation of “dockless” systems, shared bicycles that can be parked nearly anywhere, has led to unprecedented growth, increasing the number of publicly accessible bikes from 1.2 million worldwide in 2015 to more than 16 million in China alone in just two years.

Cities find themselves at a key inflection point on how to manage this revolution.

More accessible and readily available bike sharing provides a range of benefits to cities and residents – from healthier, more active transport to reduced traffic congestion, less air pollution and more ways for people to get to and from mass transit hubs. But the introduction of independently operated, dockless bikes and scooters, as well as other innovations such as electric bicycles, also poses some challenges, such as conflicts over the use of public space, sharing of data, road safety and service reliability.

How can cities harness the important benefits of the new generation of bike sharing while ensuring safety and appropriate practices by private operators?

A new WRI working paper developed under the Financing Sustainable Cities Initiative, supported by the Citi Foundation, unpacks some of these challenges by providing a framework of key questions that every city official should ask when considering bike sharing. The rapid rise of dockless systems is testament to how quickly the “micromobility” space is evolving. Cities should at least be equipped with a frame of reference to consider the impact of new technologies and services.

Creating an enabling political environment is important for any transport intervention. To achieve not only broad strategic transport objectives, but also those that are bicycle-specific in terms of mobility, decision makers, local authorities and other stakeholders need to align the political framework with the mobility landscape. This means understanding how bike sharing will fit and be integrated into the city’s wider mobility network – both physically, in terms of stations being located near public transit and schools; and operationally, in terms of service and payment integration with other modes of transport. Decision-makers also need to calculate the appropriate number of bikes in the system, and a process for rebalancing them amongst stations.

Mexico City’s experience in launching ECOBICI in 2010 is an important example of the value of an in-depth review of enabling policies and assurance that the system would be designed to help meet the city’s goals. In 2007, the city’s Department of the Environment introduced the Plan Verde (Green Plan), an urgent call for improvements to air quality and mobility in the city. It required the creation of a bicycle mobility strategy, including opening 10 kilometers (6.2 miles) of streets to people on non-motorized vehicles every Sunday. Ensuring ECOBICI was embedded into the larger urban mobility and environmental plan was crucial to the success of the system. Today, it is the largest docked system in Latin America, boasting more than 480 docking stations and 6,800 bikes, including 340 electric bikes. When Mexico City piloted privately operated dockless bike-sharing in March of 2018, officials made it clear that companies would need to comply with minimum requirements on matters such as fleet size, safety and data sharing. This includes applying for a permit and complying with a range of requirements, such as conducting a feasibility study, becoming certified as a Mexican company and committing to sharing data in real time, among others.

When it comes to dockless bike operations, collaboration between providers and local authorities is key. As seen in Mexico City, this might include putting in place permit schemes and regulations that can smooth implementation, while also providing cities with the ability to control safety, public space management and planning.

2. Be proactive about emerging innovations.

In the grand scheme of things, dockless systems are potentially beneficial to meeting city mobility and accessibility goals. They can increase mobility options for all residents if cities are proactive in finding ways to collaborate with private companies, and vice versa. However, when dockless systems first emerged, many private companies began operations without formal permission from local authorities. As was the case when other shared-economy services first appeared on the market, such as AirBnB and Uber, cities around the world lacked appropriate regulatory frameworks, prompting a backlash from government and citizens alike. As a result, cities were forced to react to new innovations like dockless bikes, electric bikes and scooters as they popped up. It was extremely difficult for cities to keep up with the pace of change. Responses have ranged from banning private operators outright, to a variety of pilot programs that test out the new technologies in a controlled manner.

Washington, D.C.’s Department of Transportation (DDOT) recently published a report evaluating the dockless bike pilot program it ran in 2017 and 2018. The report found that more people were getting around on bikes and scooters, and that the introduction of dockless systems didn’t have any direct effects on usage of the city-operated docked system, Capital Bikeshare.

The city of Seattle also piloted a private sector program for dockless during 2017. Similar to Mexico City, the city required operators to obtain a permit that covers safety issues, parking, insurance and data sharing with city authorities. Standards for regulation were set only after a six-month trial period (July to December 2017), which provided the city sufficient time to study the potential and resolve any challenges. The criteria for evaluation included ridership data, safety and collision statistics, vendor compliance, bike parking and public space issues. After only four months, Seattle’s dockless pilot provided more than 347,000 rides, compared with the experience of  its shuttered docked system Pronto, which, for a range of reasons, amassed only 278,143 rides over a two-and-a-half-year period .

It is still too early to say what the most effective regulation strategies are, but it’s clear that cities have potential mobility benefits to gain from working with companies through pilot projects. As seen in Washington, D.C. and Seattle, this type of collaboration between public and private sectors puts cities in a strong position to study the effects and impacts of these services.

3. Commit to improving safety for all road users.

In order to facilitate the success of shared micromobility in cities, safety improvements must go hand-in-hand with operational regulations. Although bikes and the other new micromobility modes appearing in cities are not inherently unsafe, the fact is that most cities are currently designed to prioritize cars. This has generally come at the cost of safety for people walking and biking, often referred to as “vulnerable users.” The explosion of bike shares increases the imperative for cities to take rapid action to improve conditions for all vulnerable road users.

The evidence is very well established in this area. Actions that improve road safety for people walking and cycling – such as lowering speeds, improving intersection design, and establishing protected lanes and crossing facilities – improve road safety for everyone, including people in cars. The safety benefits occur both in the short term, as streets become better organized and easier to navigate, and over the long term, as more mobility options and public transport access reduces private vehicle use and exposure to crash and injury.

Safe and convenient bicycling or travel on other forms of micromobility should be a fundamental element of mobility and sustainability strategies in cities around the world. Bike sharing represents a powerful means to consolidate urban bicycle use in cities, while integrating into wider networks of buses and metros. New technologies, such as dockless bikes and scooters, offer great opportunities, but also important challenges for cities. Although the pace of change can be daunting, cities can be proactive, not reactive in understanding the challenges and opportunities, and harness the benefits. The rapid rate at which these new innovations are emerging also means that a proactive approach to active mobility and road safety planning is more crucial than ever, as safety is foundational to promoting and encouraging active transportation for residents.

WRI’s new working paper empowers city officials to think about difficult questions and concerns they might be faced with as this new generation of bike sharing takes off. Thinking through these issues can ensure that decision-makers take advantage of the benefits micromobility systems may provide their residents.

The Financing Sustainable Cities Initiative, funded by the Citi Foundation, is a partnership between WRI Ross Center for Sustainable Cities and C40 Cities Climate Leadership Group that helps cities accelerate and scale-up investments in sustainable urban solutions through the development of innovative business models.

Christopher Moon-Miklaucic is a Research Assistant with Urban Innovation and Finance at WRI Ross Center for Sustainable Cities.

Anna Bray Sharpin is a Transportation Associate for Health and Road Safety at WRI Ross Center for Sustainable Cities.